The Writer chortled, the evil sound ringing in his ears like stale frosting on a forty-year-old wedding cake. He had done it! All these months of struggle, the agony of dedication and desire, all coming together in the sweet triumph of victory.

Or was it the sweet victory of triumph? The Writer was suddenly unsure. He re-opened the document and scrolled to the end. Still two hundred pages, just like it was when he closed it, and not a hollow forgery foisted upon him by viral infection or the artifice of mischievous digital trolls. The Writer sighed and closed the document.

Though it was only one of many .doc files littered across the steel platters of his hard drive, this most recent one contained more than just binary. It contained months of sweat and tears and not a few swear words. He caressed the icon lovingly with his mouse pointer.

Abruptly, The Writer's nice desktop picture (a full-color image of the top of a desk) blinked out. It was replaced by a solid blue screen with white text.

"Salt water, the main ingredient of tears and sweat, is very bad for electronic components," it said. "Please start praying now and press CTRL, ALT and DELETE to restart." 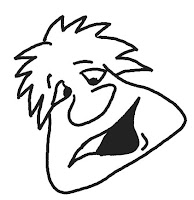 Perspiration glistened on Porky Wobblstein's brow. He wiped the back of a meaty hand across his forehead and paused in his exertion to take a few deep breaths. He hadn't worked this hard in years and now remembered why he hated it so much. It made him tired and weepy.
But he had a job to do and he wasn't going to let a little adversity stop him. Bracing himself, he lunged forward again. He stretched both arms forward, hands straining, fingers grasping.
He could almost reach his goal. It was just out of his reach, seeming to taunt him, chide him. His fingers brushed against it and sent the object even farther away. Porky groaned. There was no way he'd be able to...
In the background the TV played monotonously, its mindless chatter small comfort to Porky in his hour of distress. He planted his feet on the floor and with one mighty effort lunged forward, managing to move at least three inches. His fingers grasped, clutched, snagged!
"At last!" he growled, lifting the remote from the floor where it had fallen, slipping from his buttery fingers as he had reached for the popcorn bowl. "Now I can change the channel!"

Lumpy Meerkat sneered at his wife.

"I will not call you that," she said, putting the finishing touches on her painting of two children throwing popcorn at each other in a canoe.

"But I thought you loved me," he said.

"I do. But I am not going to call you Lumpy Meerkat. It is a stupid name for a super hero." The canoe was yellow, and it was floating on the surface of a lake with a lot of lillypads on it.

Lumpy Meerkat gave the edge of the table a spiteful nudge, causing his wife's brush to slip laterally, marring a lillypad.

"And all of those times we whistled in the rain together?"

"You were still calling yourself 'Jeff' back then."

"Swearing loudly will not change the facts," she replied. I should have married a lillypad, she thought.

"I am a super hero, Margaret, and as such I can call myself whatever I want."

"You are not a super hero," she said, calmly. The marred lillypad could not be salvaged, so she threw it out.

He turned and left the room. "I am Lumpy Meerkat, and I will do as I please," he said over his shoulder.
Posted by Paul FooDaddy Brand at 9:17 PM 5 comments:

Once upon a time, there was a little kid.

"Sure is dark and rainy outside," the little kid said, setting the mood. The weather outside was indeed rather inclement.

"Clement weather is my favorite. I cannot play baseball with my friends when it is raining," he lied. The little kid actually hated baseball.

"Oh, and my name is Voth Stenger, Lord of the Northlands," he continued. This too was a lie. His real name was Mark.

Suddenly and without warning (for if warning were forthcoming, it would not be considered sudden) a great spike of lightning split the sky, cratering the lawn and sending a shower of debris pattering down on the roof.

"Debris!" Mark squealed. THIS was something worth squealing about! As his excited feet carried him (willingly, as it turns out) down the stairs and out the front door, only the plot of his nightmares could prepare him for what was about to happen.

A giant stood on the lawn. He wore a fur kilt and viking helmet, and did not appear happy.

"How dare you use my name in vain!" he roared. "Only I am Voth Stenger, Lord of the Northlands. No one else is allowed to use that name. Unless, of course, they've paid the nominal fee of $29.99."

Mark quivered and shook. "Are you gonna harm me, mister?"

"Not if you have thirty bucks."

Mark ran back upstairs to his room and dumped out his piggy bank on the bed. He began counting slowly, carefully, taking care not to miss a cent. $29.98...
The giant was watching him through the window and Mark looked at him beseechingly. "I'm only off a penny. Is this enough?"

Mark stared back at the towering viking. He surveyed the man's weatherbeaten face, searching for a hint of pity; a chink in the giant's armor; a momentary softening of those icy blue eyes, which were so blue, they were twice as blue.

"Please, mister, I didn't mean it. If I can't afford to buy your name, can we trade?"

"Not on your father's grave, wee one! Perhaps you mistook this for momentary softening?" Voth flicked a bit of something from the corner of his eye. "It is but a piece of shrapnel from a flintbeast I vanquished earlier! As for chinks in my armor, why, perish the thought. I always make sure to sweep them out before I put it on in the morning."

The piggybank crashed to the floor as Mark sat down on his bed and prepared to meet his doom.

"Boy! So help me God if you're up there breaking things again, I'll drive you out to where your doom lives and make you meet it!"

"Dad! There's a giant viking outside! His name is Voth Stenger and he's going to harm me if I don't pay the rent on his name!"

"That's it. I am going to get permission from your mother to beat you. Don't move."

"Besides," Voth continued, picking up the thread from a conversation you thought had ended, "if I were to be called Mark, how would I strike fear into things? It's not a scary name."

Mark thought quickly. There might just be a way for him to stay alive after all.

"I know a 24-hour coffee shop where we can discuss this, mister," he said. "Help me out the window?"
"What is this coffee you speak of?" Voth asked, once they were firmly ensconced in a corner booth.
"It's the hot drink of choice for millions," Mark said. "You haven't tried it? You're from the Northlands!"
"We're a little behind the times," Voth admitted sheepishly. "Our computers are still running Windows 95. Oh, and I'm still planning to kill you."
"Try the coffee first. If you don't like it, you can do with me as you will."
Voth narrowed his eyes. "Very well. But if this is a trick..."
"Just try it."
The giant raised the drink to his lips, his massive hands dwarfing the cup. He sipped...
Posted by Paul FooDaddy Brand at 7:02 PM 17 comments:

Welcome to Story Shots, the home of inspired nonsense for the busy lunatic. Here's how it works: the posts are collaborative efforts, with each change in authorship denoted by a change in font color. Foodaddy's words are in dark red, while Regan's are in blue. Enjoy!