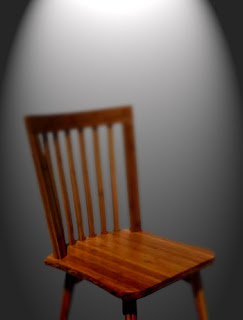 "Look, I'm not saying you haven't done a wonderful job so far," Harvey said, shifting to a more comfortable position in his wooden chair. He shrugged encouragingly. He would have made an encouraging hand gesture, but his were tied behind his back. "You did manage to get me tied up, more or less, and you deserve credit for that. My feet are a bit loose, though, and I think I could probably get one free if I slipped out of my shoe. You might want to tie that knot tighter."

Harvey's captor, a stocky man in a ski mask and rainbow suspenders lowered his cell phone, covering the receiver with his hand. He scowled at Harvey. "Would you shut your neckface hole before I rip it off? I'm talkin' to the boss here!" he growled.

Harvey rolled his eyes. "See, that's another thing I feel you could develop a little more. 'Neckface hole'? Come on, Brad. Can I call you Brad? Look, Brent, I'm just saying that if you're going to make threats, they should at least make some sense. I'm not going to be scared if I don't even know what part of my physiology you're threatening."

"Jesus Christ! I told you my name is Justin four times, you fucking lunatic!" the kidnapper screeched. Suddenly, his face went pale and his mouth dropped open. "Oh, no, sir, not you! Not you! It's this knucklechop I got tied to the chair here," he stammered.

"You want me to shoot him now? Just say the word, boss, and this chump is toast."

"Oh, and Brent? You probably shouldn't tell me your real name, just in case I do get free. Big mistake, there. That's why I'm calling you Brent. Or Brad. I'm lookin' out for you, buddy. We're in this together, after all."

Harvey twisted his upper body, straining the bonds that pinned him to the back of the chair. "Some of us a little more securely than others, am I right? Haw! Hi-five!"

Justin snapped his cellphone shut and dropped it into his pocket. He turned to Harvey. "You're gonna be laughing out the other end of your lips if you don't spill the bacon, buddy," he said, turning the last word into a verbal sneer.

"Oh, my, Brent! I don't even know where to begin! Pretty much everything you just said was either inaccurate, badly articulated or just plain ineffective. Let's start with--"

"Let's start with the thing about the lips, shall we?" Harvey struggled to speak around the laughter. "Other end of my lips? Oh, mercy me!"

Justin drew his chrome .45 and pressed the barrel firmly into Harvey's temple. "You shut up right now," he said, his voice dangerously quiet; a calm modulated by fury, "and tell me where the safe is. And after you tell me where it is, you are going to give me the combination, or you are going to die. Is that capisci?"

Harvey's left ear pressed into his shoulder as the gun's barrel ground harder into his right temple, forcing his head over.

"I said do you understand!?" Justin roared. There was a click as he released the .45's safety.

"I do. I understand everything except how you figure I'm going to know where the owner of this house hid his safe, old sport!"

The pressure on the side of Harvey's head relented.

The clock on the wall ticked softly.

A car whooshed by on the street outside.

"Wait a minute. What did you just say?" Justin said, removing the barrel of his gun from Harvey's temple. It left behind a little red "O".

Harvey chuckled. "Like I said, Brent, you need to really work on this act of yours a little more! This isn't my house." He gestured to his right breast with his chin. "I'm just here to install a washer and dryer. See? Says 'Maytag' right under my name."

"So, um, I guess I'll be going then," Justin said, shifting uncomfortably from foot to foot.

"Want me to untie you, um, Harvey?" Justin muttered.

"Oh, don't trouble yourself," said Harvey, wriggling his hands free and shaking the ropes to the floor. He stood. "Honest mistake! Now, remember what we talked about, there's a good lad."

The two men stood, awkwardly facing each other.

Welcome to Story Shots, the home of inspired nonsense for the busy lunatic. Here's how it works: the posts are collaborative efforts, with each change in authorship denoted by a change in font color. Foodaddy's words are in dark red, while Regan's are in blue. Enjoy!